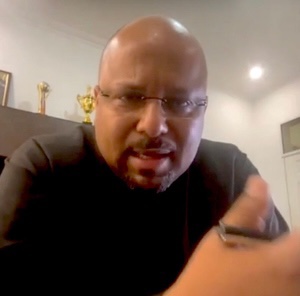 Videos from an apparent sting operation show high-ranking Congolese political adviser Vidiye Tshimanga offering access to the country’s minerals in exchange for a cut. The makers of the videos have refused to identify themselves.

On a hot day last July, Vidiye Tshimanga, one of the closest advisers to the president of the Democratic Republic of Congo, left his luxury hotel in London’s upscale St. James neighborhood, hopped in an Uber, and rode the short distance to Hide, a Michelin-starred restaurant frequented by the city’s jetset elite.

His lavish trip had been paid for by a man and woman who claimed to work for a Hong Kong-based conglomerate interested in Congolese minerals. During a video call the previous month, Tshimanga had described his connections to President Félix Tshisekedi. Then the pair invited him to meet in London. 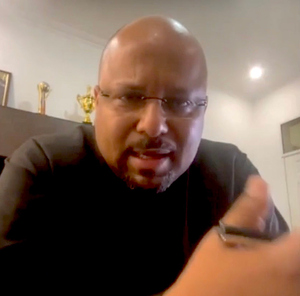 Credit: OCCRP Screenshot from a secret recording of Vidiye Tshimanga.

But these were no ordinary investors. Over the course of three meetings, online and in person, the pair secretly recorded Tshimanga as he bragged about how close he was to the Congolese president and offered to pave the way for them to receive mining licenses, cut through red tape, and “protect” them from bribe-seeking officials — in exchange for being given a stake in a potentially lucrative joint venture.

He described how he could shield his involvement with proxies and opaque offshore trusts. At one point, he even seemed to suggest he was working on the president’s behalf.

“If I ask [the president] something, he gives,” Tshimanga said, speaking English.

In another clip, Tshimanga was asked who would partner with the investors.

“Of course, not directly,” the investor responded, to which Tshimanga nodded.

At another point in the videos, Tshimanga bragged about being flown to Paris in a helicopter by a businessman who he claimed to have helped to secure an oil concession. The businessman “is coming with 200 million,” Tshimanga said.

Speaking to reporters later, Tshimanga denied wrongdoing, blamed some incriminating statements on his poor English, and claimed he had been leading the purported investors on. He said he was being set up by enemies, and listed some possible foes who might want to undermine government policies that had hurt their interests.

Reporters were unable to determine who taped the videos, which were edited together into a series of excerpts of the meetings and leaked through an intermediary. Communicating anonymously via the messaging app Telegram, the makers of the videos at first claimed they wanted to see Congo “cleaned” and said Tshimanga and others had “rigged” the bids for mining licenses, but stopped responding when asked to identify themselves and discuss their motives further.

Industrial espionage is rife in Congo, as companies compete over lucrative minerals such as cobalt and copper. Corporate intelligence firms such as Israel’s Black Cube have been reported to stage similar sting operations in the past.

Despite the lack of clarity on who filmed the videos and why, OCCRP decided to report on them because Tshimanga himself confirmed the taped encounters took place, and because they offer a rare insight into how such deals are structured in Congo. The country has vast mineral wealth, but much of the revenue has been siphoned out of the country and into the hands of a small elite, frequently abetted by foreign companies drawn by the potential for huge profits.

Scandals have broken out repeatedly: In May commodities and mining giant Glencore agreed to pay $1.1 billion to U.S. authorities to settle bribery charges related to its investments in Congo and elsewhere, and the Kazakh mining company ENRC has been under investigation in the U.K. for almost a decade over allegedly corrupt mining deals in Congo.

Despite a disputed election, many hoped the arrival of Tshisekedi to power after 18 years of corruption and mismanagement under Joseph Kabila would usher in a new dawn of good governance. But little has changed on the ground, an analyst said.

“When Tshisekedi took office there was some expectation that things were going to be different, but fundamentally Tshisekedi is no different to his predecessor,” said Christian Géraud Neema Byamungu, Francophone editor at the China Global South Project, a media outlet that intensively covers Congo’s mining sector. “We see the same behavior, we again see a regime in need of money, and the only place you find money in Congo is the mining sector.”

The edited videos featured Tshimanga either speaking to the camera on a Zoom call or filmed surreptitiously from a low angle. The people he met were not visible, and a voice distorter was applied when they spoke.

They claimed to represent the Hong Kong-based conglomerate CK Hutchison — specifically its chief executive, Li Ka Shing, and his son Victor. However a representative for CK Hutchison said the company “has no assets nor interest in the Democratic Republic of Congo nor authorized any representative on behalf of the company.”

In the first meeting, conducted over Zoom, Tshimanga proposed setting up a joint venture with a Congolese entity such as his own company, COBAMIN.

As an example of how this could work, he described a partnership he claimed to have through COBAMIN with the Toronto-listed Ivanhoe Mines, which gives him a 20-percent stake in a shared project to mine copper and cobalt.

“With Ivanhoe, Ivanhoe have 80 percent, I have 20,” Tshimanga said during the meeting in the London restaurant. “My 20 percent are split in two, so you have 10 percent, it’s COBAMIN — my company. The other 10 percent, because in the mining law you have an obligation to have a Congolese person…[that] Congolese person is someone we have chose [sic].”

It is not clear what deal he was referring to. Reporters could not find any companies in Congo’s company registry or in Ivanhoe’s company filings that were jointly owned by COBAMIN and Ivanhoe or its subsidiaries, and did not find any evidence that Ivanhoe had made payments to Tshimanga or his companies.

But other evidence raises questions about possible indirect connections between the companies. COBAMIN does own three permits next to others held by an Ivanhoe subsidiary, which it secured in February 2019, just a month after Tshisekedi succeeded Kabila. COBAMIN was granted all three permits within eight days of applying, a turnaround described by Elisabeth Caesens, an expert on Congo’s natural resource management, as “record time.” Ivanhoe Mines Exploration DRC applied for its own eight permits on March 1, 2019 — just over a week after COBAMIN’s were granted — and received them a few months later.

Caesens, who is director of Belgian NGO Resource Matters, said companies in Congo have used a range of pretexts to move money to political figures, including adjacent mining permits as a justification for “rent” or payments to access land.

“Corruption can take many shapes,” she said. “The scope does not matter, as long as it provides a base to secretly channel money to politically exposed people.”

Ivanhoe declined to answer specific questions about Tshimanga’s claims, payments to COBAMIN, or the timing and placement of the mining licenses obtained by Ivanhoe and COBAMIN in 2019. The company said its activities in Congo are “governed by stringent corporate anti-corruption policies.” Ivanhoe said it “regularly applies for official exploration permits in areas its geological team identify as prospective for mineral occurrences.”

Caesens said Ivanhoe should “unambiguously and officially state whether or not it has any contractual relationship whatsoever with COBAMIN” or any other political figure in Congo.

In a later meeting with reporters in Paris, Tshimanga contradicted his statement in the videos and said he had no existing deal with Ivanhoe. He claimed the Canadian company had “tried to buy my concessions, but I am waiting to leave my [government] job to exploit them myself.”

At one of the London meetings Tshimanga spent several minutes underscoring his closeness to Tshisekedi, even claiming to have financed his campaign to become president.

Tshimanga also made it clear that he understood his public position should bar him from striking deals with the government that benefit him, such as the one under discussion. “Officially I cannot be involved in this kind of project,” he said on the Zoom call. But rather than ending the discussions, he suggested a workaround that would disguise the fact that he is a so-called “politically exposed person,” known in industry jargon as a “PEP.”

“The company will not be on my name, because I’m a PEP,” he said. “We have trusts that are in Mauritius, we have different ways of doing it, but usually we put names of people that we control in the country. But we run it. We are always — I’m always behind.”

Tshimanga outlined how the proxy-led Congolese company could be held through anonymous offshore structures he had in Mauritius, Singapore, the Isle of Man, or Hong Kong.

“I prefer Hong Kong,” he said.

Asked for comment, Tshimanga offered to meet reporters at the posh Hotel Claridge on the Champs-Élysées in Paris, where he arrived with a tattooed and goateed bodyguard. While he confirmed the videos were authentic, he said that he had been set up. He claimed parts of the recording were unreliable because of his poor English, but also said he knew it had been a trap and was leading on the man and woman to “see how far they would go.”

He played reporters a snippet of his own recording of the end of the meeting, where he tells the “investors” that he cannot do business with them because he is in the government. He declined to share the full recording.

Tshimanga said he suspected the pair worked for an industrial espionage company. Such companies have been active in Congo amid intense competition for access to the country’s mineral wealth. A 2019 documentary by Israel’s Channel 12 showed how the industrial espionage company Black Cube is in the practice of secretly recording people while leading them to believe they are business partners.

Tshimanga gave reporters the names and phone numbers of the people he had met, but reporters could find no record of CK Hutchison employees fitting their description. The numbers were disconnected and not found on registries, suggesting they used burner phones.

Byamungu, the analyst and editor at China Global South Project, said Tshisekedi’s cabinet was divided over the review of the terms of Chinese mining contracts, and as such Tshimanga may have many enemies at home and abroad. But he suspected powerful forces behind the leaked videos of Tshimanga.

“The operation clearly cost a lot of money, so you’re not dealing with small players,” he said. “A Congolese rival could catch him red-handed in [the Congolese capital] Kinshasa. But to fly him to London [suggests] it may be a foreign player, and Tshimanga wouldn’t be the main target of such an operation, it would be the Tshisekedi regime. Elections are due next year, so the question is: Who would want to embarrass Tshisekedi?”

In 2020 French whistleblower protection group PPLAAF published a report accusing Israeli minerals tycoon Dan Gertler of evading sanctions. The group was subjected to anonymous online smears and its founder secretly recorded. Whoever was behind the campaign “did not hesitate to use pirate recordings, cheap film [edits] and blackmailing via lawyers,” PPLAAF director Henri Thulliez said.

The tactics used against Tshimanga were typical of “the methods used by ill-intentioned groups that are mushrooming in the [Congolese] mining sector,” Thulliez added.

Speculating about who might have wanted to embarrass him, Tshimanga had no shortage of candidates, from foreign mining investors to rival politicians.

Fact-checking was provided by the OCCRP Fact-Checking Desk. 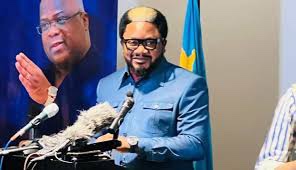 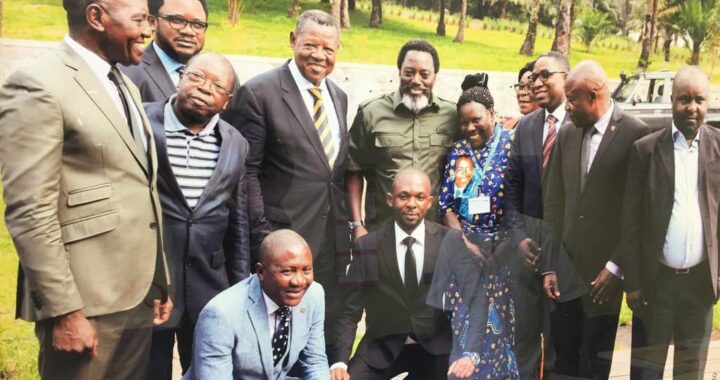 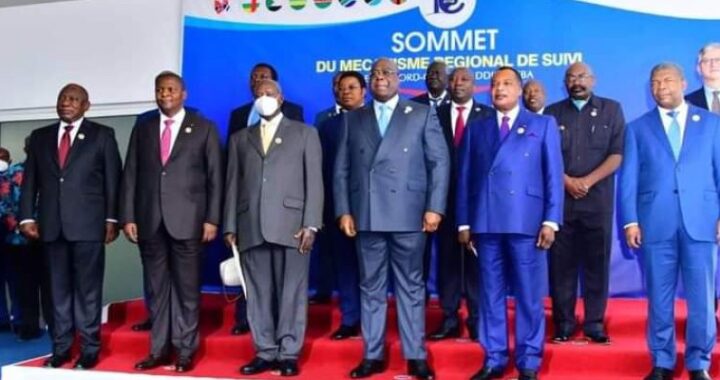 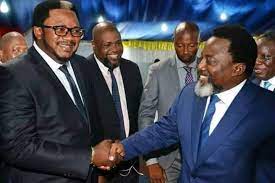 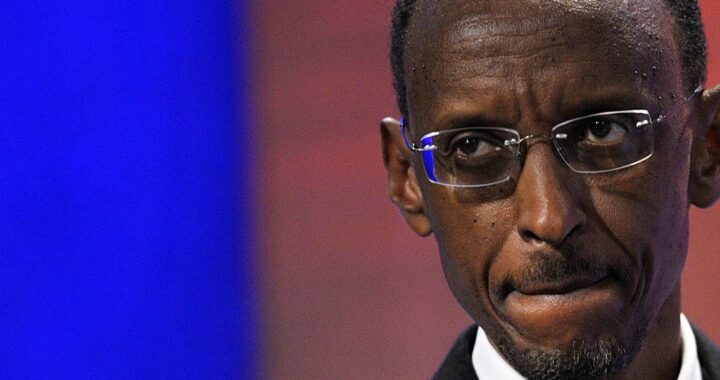